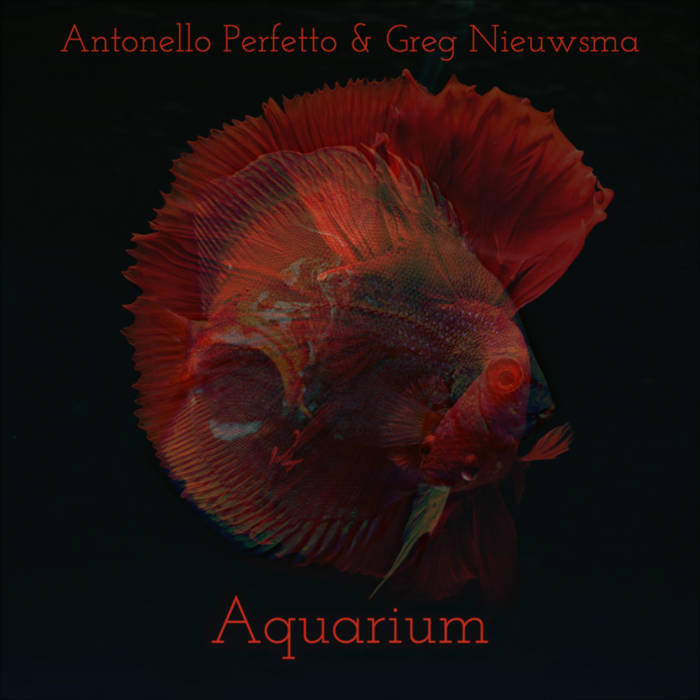 'Long ago before I moved to Poland I would collect all sorts of used books. Used book stores, garage sales, community book sales, the discard rack of the local library, I'd raid them all. One of the books which found its way to my shelf was a book called "Fish Diseases: Diagnosis and Treatment" by Edward J. Noga. Not surprisingly, I never read it, though maybe I flipped through it while sitting on the toilet sometimes.

After the Corticem record that Anton and I did with Bogdan Markiewicz last year, we'd been forced to move out of our rehearsal and recording space. We were excited by the new record and Anton and I wanted to continue doing more in the same vein. The lack of studio space made it difficult to recreate the type of anything-goes sonic experimentation we'd done with that though. We often work to a concept or theme - and remembering that old book I suggested the theme of fish diseases. Anton thought the idea was silly, so he agreed.

Anton and I started to get together in his living room to try new things, One of which was to midi sync two synths and jam together, each of us manipulating one of the synths. It's worth noting here that Anton is mainly a drummer, and I'm mainly a guitarist. We both can play a bit of keys, but the intricacies of synths with their different wave forms and filters and arpeggiators- we were out of our comfort zone. As could be expected, not all attempts were successful. But one night in particular it clicked, and one after another, the improvisations that poured out were winners.

Shortly afterwards we moved into a new studio space. Unlike the previous room, this was a shared space and there wasn't room for all the gear we'd jammed into the old place, so what previously had been done spontaneously now required a bit more advance planning.

The handful of synth tracks from that evening served as the leaping off point. To those tracks we added drums and guitar and the assortment of other sounds and noises. And despite the more planning required, we did manage to bring spontaneity (large amounts of it, in fact). Whistling and chanting and clapping were new territories for us.

At some point along the way the fish had healed though, because the "diseases" aspect to the theme got left behind. The tracks were each named for a species of fish, and these now-healthy fish were given a beautiful new home in "Aquarium."'
-- Greg Nieuwsma

The sounds swimming around on this record come from a MicroKorg XL, an Arturia Microbrute, a drum kit, a, Nord electro 3, a Gem sprinter 61 combo organ, four electric guitars, a handful of rubber bands, a bass guitar, some samples, a suitcase harmonium, , some vocals, some handclaps, some shakers, a glockenspiel, some whistling, a banjo, a lap steel, text-to-speech technology, a virtual instrument or two, and have been modified or processed using a Tascam 414mkii 4-track recorder as well as various loopers and effect pedals.

Anton and Greg would like to thank chianti - without which this album would have sounded very different.